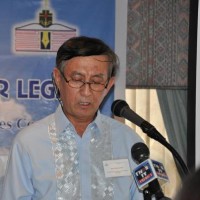 Respected guests! It is a great honor to be here and celebrate 850th anniversary of the greatest conqueror in human history. The Great Gengez Khan was not only a great warrior but also a great thinker of his time, who bestowed a comprehensive law in the form of YASA to his people and other entire conquered nations. It is a matter of sorrow that some historians especially Iranians and Arabs have mentioned him and his successors as barbaric while it is a fact that on the contrary he, along with his successors brought peace, stability, justice and prosperity to all the conquered regions and introduced unique kinds of knowledge and art. It was Mongols who promoted miniature art to its peak especially during the Ilkhante period (Ikhan means younger Khan). They also promoted the new form of history writing which we  in Persian say “WAQAE NIGARI” or narration of facts. Some famous Muslim historians like Rashid-ud-Din-Fazlluah, Juwayni, Wassaf etc are  gifts of Ilkhante Mongol dynasty. The famous kind of Persian inscription “NASTALIQ” that is being used till now, is also the gift of the Great khan’s successors.

Honorable guests! It is not possible for me to shed light on the life of this greatest conqueror of the world but it is a good opportunity to introduce briefly my Hazara nation who is a part of “ULUS MUQUUL” that  the Great Khan himself named in spring 1206,s “QORALTAE” or grand assembly  held in “QURAQURAM”. Historians, who know Hazaras, believe that they are pure Mongol or some believe that they are turcko-Mongolian origin. It is correct that some Turkic tribes like QALAJ, QARLUQ , TURKMAN etc are now part of Hazara nation but the big portion of Hazara nation consists of pure Mongol origin. Like DAE CHOPAN (an Ilkhante commander), DAE BERKA(a Mongol commander), , ARGHUN (Il Khanate Commander), NEKODAR(Jughtain commander)or  BESUD .It  would be  very interesting for the audience to know that in Hazara BESUD there is a sub-tribe with the name of  “BURJAQIN”  which is believed to be the name of the tribe of the Great Khan himself. It is worth mentioning that the Turk tribe like NAEMAN is now part of Hazara nation but was merged into “ULUS MUQUUL” by the Great Khan. Historically it has been proved that up to the early 16th century some Hazara tribes were speaking Mongolian language as mentioned by king Babur the founder of Mughul dynasty in India in his famous book TUZKI BABURI. Despite the similarity of tribal names there are dozens of places in Hazarajat with the purely Mongolian name like JIGHATU near Ghazni  (driven with name of JUGHTAEE, the Great Khan’s son), BU-SED (taken with the name of ILKHANATE king BU-SAEED). CHOPAN (an  ILKHANATE commander as mentioned earlier).

Honorable guests, in spite of all other historic facts, a scientific research carried by Oxford University Bio-Chemistry Department in 2003, also proved that Hazara people are Mongolian origin. It is worth to mention that a campaign has been initiated here in the United States to explore the origin of Hazara through complete DNA test. I am sure that the finding of this research will not be other than the research done by the Oxford University of Great Brittan.

Hazara as a new nation established a great kingdom under  Arghun dynasty  in early 16th century which consists from Kabul to Sindh (present Pakistan). Later on Babur captured Kabul and Qandahar but their rule remained intact on the vast areas of northern Balochistan, Sindh and Multan (present Pakistan) up to 1591 A.D. The reflection of  the glory of Arghun can be seen in “MUKHLI” graveyard Thatha, which was the capital of this dynasty. Keeping in view the unique style of construction MUKHLI has been entitled as “World Heritage”.

Honorable guests!  Unfortunately the deprivation of Hazara started on the rise of Safavid in Iran. Safavid captured Qandahar in 1653A.D and posted Gargin Khan as governor with a clear intention to expel Hazara Mongol from plain lands of Heart to Kabul. He did complete this task by pushing Hazaras from their plain lands and planted a new Pashtoon Ghalzai tribe on the occupied Hazara lands. This occupation process kept continued and even made faster during ABDALID in 18th century. And this policy was finalized by Amir Abdur Rehman during 1880 to 1893 who annexed Hazarajat the land of Hazara nation and made part of his new Afghan kingdom (Afghanistan) forcefully. During 1880 to 1893 war, Amir Abdul Rehman has eliminated 62% of Hazaras in Hazarajat and disowned them of their fertile lands which were later on, distributed among Pashtoon nomads (Kochi). Therefore now historians agree that from hundred to hundred and fifty thousand square miles has been reduced in total area of Hazara home land.

Ladies and gentlemen! Despite all this massacre and genocide, Hazaras being a Mongol warrior not only exist in Afghanistan but now considered as a hope for a bright future of this war hit country because of their extra ordinary constructive abilities. Hazaras have got the highest education rate in Afghanistan in both genders. The  ever first Olympic medalist Rohullah Nekpai, ever first world boxing champion Hamid Rahimi, ever first female Governor Habiba Sarabi and ever first female Mayor Azra Jafferi  are the best proofs of being an extra ordinary nation in Afghanistan’s three centuries long history from one hand, while on the other hand it also reflect to their Mongolian origin ethnicity in which women had and still have a significant role in the society. Otherwise in Afghanistan like orthodox Muslim scenario, women are considered as an absurd product.

Honorable guests! During the Dark Age of Abdur Rehman and later on during Taliban era a large number of Hazaras were compelled to leave their home land Hazarajat and take refuge in neighboring countries. A huge number took refuge in Iran but unfortunately because of their Mongolian back ground they are being treated in-human and called Hazaras as BARBARI, which means barbarian. Hazaras are still struggling to use their original name in Iran but only have been allowed to use the meaningless name of KHAWARI (Eastern people) instead of Hazara. However, in British India Now Pakistan they were treated equally. Therefore, they flourished in all aspects of life quickly. Just imagine that a young Hazara Musa Khan recruited in British army as a common soldier but by his Mongol genetic ability he rose to the post of Commander In Chief of Pakistan army. He successfully led Pakistan army in 1965 Indo-Pak war with 5 time bigger Indian army, however it will be interesting for audience to add that later, during in other war in 1971, this same Pakistan army not only lost his Eastern part present Bangladesh but also faced one of the world’s biggest army surrender of more than 95 thousand soldiers to the Indian army.

Ladies and gentlemen! Unfortunately for last 12 years this most educated and well organized Pakistani Hazaras are facing a wave of genocide and ethnic cleansing by state backed religious extremist militants. So far, more than 600 innocent Hazaras mostly educated and professional have been killed. Once again thousands of Hazaras have been compelled to take refuge in western countries and other thousands are seeking for. But despite all these, I firmly believe that being a Mongol we will survive because we are survivors of the fittest.

Honorable guests! Taking the opportunity of this historic occasion I want to mention here especially for my Mongolian historians and academicians that a huge first hand treasure of information about Great Mongols are available in Persian either in printed or manuscript forms in Iran Pakistan, Afghanistan and India or in big libraries of the world. No doubts without this treasure, compilation of an authentic comprehensive history of Great Mongols are almost impossible. Therefore, I humbly request to my Mongol academicians to take necessary steps for collection and translation of this treasure in to Mongolian and English. Due to shortage of time I am mentioning here a few basic famous sources:-

These published books were written during Ilkhanate period under direct supervision of Ilkanate kings.

Fortunately I have visited some old libraries in Sindh and Punjab Pakistan, there are dozens of valuable published or un-published historic books about Mongol history in Persian consist of first hand informations. It would be very interesting for my honorable guests that in 2008, I found two very rare books by the name of GHAZAN NAMA and another one OLJAETU NAMA which cover almost all official activities of these two Great kings of Ilkanate dynasty from Karachi Pakistan, in a Sunday footpath book bazaar.

At the end I would like to say especial thanx to birar Baymabakhuu who made possible all this arrangement and of course the organizers of this great event who provide me this opportunity to speak in such a great historic event with such an honorable audience. Thank you very much.

Note:- This write-up was presented in the event of 850th “Anniversary of Changez Khan”                      in Mongolian Embassy Washington DC, on May 5th. It was a two Days(May 4-5,2012) International Conference organized by “ The Mongolian Cultural Center Washington” and “The Embassy of Mongolia Washington” In partnership with “The Mongolian Institute for Defense Studies” With contribution from Mongol-American Cultural Association. Well renowned scholars from USA, Mongolia, Canada, Germany, Qazaqstan, Norway, Turkey, Azerbaijan and Korea were presented their articles and presentations. National Geographic Society’s Mr. Albert Yu Min Lin was also presented his presentation.