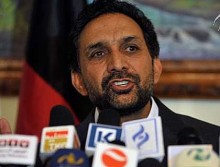 Massoud told a press conference in Kabul, the office of Haji Mohammad Mohaqiq, ANF Leader and a member Wolesi Jirga, was attacked in Bamyan province at the government’s behest and another leader of the front had been accused of treason.

“We are not traitors. Traitors are those who have looted $900 million from Kabul Bank (KB), who built a township in Kandahar by ceasing the land of Ministry of Defense, those who won elections through rigging and fraud and those who misused the Ghori Cement plant and took financial benefit from it,” the former vice-president said, in an apparent reference to President Karzai and his family.

A day earlier, Gen. Rashid Dostum was blamed for trying to create hurdles to the exploration of oil and gas in the Amu River basin. As a result, the National Security Council referred him as a traitor to the Attorney General Office.

But Massoud said Dostum had been branded as traitor after he asked President Karzai’s cousin, who owns a company involved in the exploration process, to hire local people as firm workers. He said Dostum wanted to find jobs for people who had no food or other basic facilities of life. “That is why he has been declared a traitor.”

Massoud insisted that ANF leaders were neither traitors nor they wanted the division of Afghanistan, urging the government to avoid acts that could have negative repercussions. He said the government through pressure tactics wanted to prolong its rule beyond 2014, when President Karzai’s office term ends.

He also alleged the government was misusing its authority and had started an undemocratic campaign against its opponents.

ANF Spoksman Faiz Ullah Zaki, while reading ANF declaration, said that “The objectives and policies of Afghan National Front are to decentralize the political setup and strive for a parliamentary form of government and to bring about necessary amendments in this regard so that the national integrity and unity should be strengthened and the system should be made participatory; while the government accuses the Front for the allegations that are quite contrary to these objective.”

Declaration further stated, “The recent incidents and steps clearly show that the government is using the resources of the country to harm and disfigure the personalities of the leaders of the Front but fortunately the wise people of Afghanistan are aware of such attempts and they even condemn them.”

Afghanistan National Front cautions the government to shun the efforts for spoiling the political atmosphere in the country, which is against the peace and tranquility as the responsibility of the government is to guarantee peace and discipline and generate tolerance for the political opposition, it further stated. (Outlook/Pajhwok)

Who kills Hazaras in Pakistan and why?