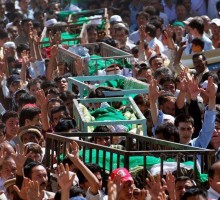 At least 12 Hazaras have so far been killed in four separate killing incidents within last seven days in Quetta City, Pakistan. Two of them were murdered on Tuesday 3rd, April 2012 by terrorists while nine Hazaras including a woman and a minor girl were killed in two separate killing incidents on March 29th, 2012. The first one took place, when a Suzuki pick-up that was on its way to the city centre from Hazara Town was ambushed by gunmen in the morning which resulted in the death of six Hazaras while five other Hazaras were reported to have received severe bullet injuries; one of them was stated to be very critical.

The killing of the day doesn’t stop here; later on the same day, three more young Hazaras are killed by the police soon after the incident when they were protesting for the capture of the terrorists. Last Monday, March 26th, 2012, unidentified gunmen opened indiscriminate firing on the shop of Hazara on Sabzal Road Quetta, which resulted in the death of a Hazara ironsmith while his co-worker (Hazara) received serious bullet injuries.

The killing, the kidnapping and the firing on the shops of Hazaras have become the daily routine in Quetta City, Pakistan. The killing of one or two Hazaras doesn’t make news on the local and national press in Pakistan, it needs at least five Hazaras to get killed to be on the press in Pakistan. Now it’s been more than ten years, Hazaras are collecting their dead bodies from the different parts of Quetta city and almost 700 Hazaras have so far been killed since 2004.

The anti-Shia religious militant extremists mainly Lashkar-e-Jangvi publicly claims the killings of Hazaras and has vowed to turn Quetta city into the graveyard of around six hundred thousand Hazaras. After every killing incident, the terrorists walk away easily and the government seems unwilling to capture the terrorists as Hazaras are not a political or financial might in Pakistan.

As mentioned earlier, that for the last ten years, almost 700 hundred Hazaras have so far been killed and the present government doesn’t show any responsibility to catch terrorists involved in the killing of Hazaras; rather it is imposing restriction on the movement of Hazara community around the Quetta City.

The two high profile terrorists Usman Saifullah Kurd and Shafeeq Rind belonging to anti-Shia Lashkar-i-Jhangvi organization, who were believed to be the killers of Hazaras, mysteriously escaped from a very well-organized jail of Anti-Terrorist Force in Quetta Cantonment area where no one can go without a pass, implying that their escape was facilitated by the security agencies.

The present Governor of Balochistan, Nawab Zulfiqar Ali Magsi quoted his Inspector General of Police (IGP) saying, “Whenever police arrested any criminal, he received calls from high ups for his release” while, Home Minister for Balochistan Mir Zafarullah Zehri on a point of order, informed the assembly that “he had clues about those involved in the target killings but he was helpless.

He said, “If the elected representatives were given responsibilities, the situation might improve” are enough to prove the bitter reality about the reach of the terrorist organizations into the highest ranks of Pakistani Government. Both the governor and the home minister publically announce that the government is helpless and doesn’t have authority to get control on the terrorists and to put an end to the terrorist activities going on against the Hazara Community.

Last September and October 48 Hazaras were taken off the bus/wagon in different incidents, were lined up and killed, while Chief Minister of Balochistan Aslam Raisani, responding a question from a journalist in Islamabad made fun of Hazaras by offering to send a truckload of tissue papers to the bereaving families. Another Pakistan People’s Party parliamentarian from the area — Ayatullah Durrani — suggested on a television show that the victim community benefits by getting Australian asylum.

Despite being heavy presence of the police, Levies Force and Frontier Corps check posts in and around the Quetta city, the terrorist walk freely in the city and kill any Hazara, wherever they find in the city even in most cases just 50 meters away from the security check posts.

A Video of the killings of the Hazaras has also been released on the Youtube and Facebook in order to terrorize Hazara community in Quetta and all around the world.

And moreover, The Asian Human Rights Commission (AHRC) says that it is aware of militant outlets which are said to be financed by the ISI and trained with the collaboration of Frontier Corps and Military Intelligence in Balochistan. Their main tasks include counter-insurgency, spread of Talibanization, sectarian violence, Killings of Hazaras and Shias, attacks on NATO supply routes and targeting journalists and lawyers.
Now the question arises as why the state secret agencies support religious terrorists in Pakistan especially in Balochistan?

Soviet presence in Afghanistan during 80’s helped the intelligence agencies especially ISI to establish numerous religious schools (Madrasas) alongwith training centres throughout Pakistan to use Mojahidin against Soviet invasion. Knowing the significance of Mujahidin and the strategic area, General Ziaulhaq the then president of Pakistan on the pretext of Afghanistan war used the religion and religious militants in Kashmir to pressurize India to negotiate on Pakistan’s terms and conditions.

Once again, the present military higher ups are following the same route to promote religious extremists and underground religious militants to not only terrorize the politicians throughout the country but also planning to use them in Afghanistan especially after 2014 with full force. The present Pakistani establishment has congregated all the extreme religious and militant groups including Taliban under one umbrella by the name of “Difa-e-Pakistan Council” under the leadership of former ISI Chief General Hameed Gul to use them for Afghanistan after 2014.

Now, you might have a question, as why Hazaras are being killed in Quetta City by the extreme religious militant groups, the answer is very simple. After 9/11 when international forces attacked on Taliban in Afghanistan, Hazaras in Afghanistan along with other ethnic minorities fully supported the international community to get the Taliban out of Afghanistan.

When Taliban couldn’t fight with international forces and Hazaras in Afghanistan, they moved back to Pakistan and they started killing Pakistani Hazaras for being Shia who have been living in Pakistan since 1890. And one thing more, in Quetta City, Hazara are dominantly Shia and it is very easy to target them just because of their Mongoloid features and physical attributes. Since the declaration of religious militants as “strategic asset” by the ruling elites of Pakistan, the religious militants groups like Lashkar-e-Jangvi and Taliban have been given free hands to do anything they like.

An Agenda for Afghan Peace Talks