It is obvious that the role of women as half part of the society is very crucial in any country’s development given that this potential is not misled in wrong directions that are rather harmful to the society than useful.

The changes in Afghanistan in the last decade following the 9/11 attack opened a new horizon for millions of Afghanistani citizens who benefited particularly two large groups; the ethnic/religious minorities and the women who both suffered from the fundamentalism in Afghanistan during the years of Taliban sovereignty.

These positive changes, unfortunately, were not so likable to some specific groups who would look their benefit in the chaos of extremism and fundamentalism in the country to gain bred and fame for themselves.

Among many groups including Taliban and other extremist armed groups that mainly consist of male members; there is a women group as well, which is not so keen to embrace the new changes because its existence in the new changes would be questioned.

Today unfortunately in Afghanistan, the so-called group RAWA (Revolutionary Association of the Women of Afghanistan) like most of the extremist groups in the world, comes under the category of the movements that function exactly in contrary with the title they carry.

Using the fascinating modern terminologies such as democracy, human rights, and women’s rights in the introduction of their activities, the RAWA group carries on its secret activity that is to gain financial benefits from the western countries for their personal and ethnic interests.

Based on the evidence, in addition to misuse the financial aids that they receive by the name of Afghan Women, this group functions as the left hand of Taliban as well to promote fundamentalism, racism, and superiority of the Pashtoons through ethnic discrimination by which they guarantee their existence.

In this document of Rawa you can read in the Pashto language: for women is a duty to fight the holy war (jihad) against the communists. On the upper left, you can see the black flag symbol of fundamentalist jihadist.

The date of establishment of RAWA as an association backs to the acme of the cold war period in the early 1980s, when the Mujahedeen groups were being supported by the west as puppets to defeat the USSR and the role of RAWA was as an anti-puppet against Mujahedeen in case if needed.

Comparing the currently military or political groups in Afghanistan, based on its activities the RAWA group parallels the Taliban movement; a Female Taliban Movement.

The role so far RAWA group tried to play was pretending to be an idealist group of pure, sincere and revolutionary women who work for the women’s rights, democracy and social justice in Afghanistan but the evidences of their relationship with ISI (Pakistani Intelligence Services) and with the Taliban especially during the years of their sovereignty has revealed their real existence.

First of all the most important point is the geographical position RAWA group has chosen for its activities; Quetta.

Quetta is the city where most of the destructives conspiracies against Afghanistan are planned there.

RAWA group has its main office in Quetta Pakistan a city where there are many Religious Madrasas and then the main Taliban Leadership Compound is located there as well and apparently there is no danger for the RAWA group activists, neither clashes between RAWA group and the Taliban which makes us clearly understand about their relationships, their common goal with different tactics and under different names.

The Taliban with an exclusive-structure –only- for the Pashtoons, using the name of religion, follow their ethnic-political goal that is the “state of superiority of the Pashtoons” in Afghanistan and Pakistan while the RAWA group does the same thing but with a different approach. Here we could compare the Taliban and RAWA group based on their activities.

The RAWA organizational structure is very exclusive as the Taliban’s therefore it is hard for a non- Pashtoon woman to get a membership. RAWA group uses the name of democracy, human rights, women’s rights and social justice, while in reality applies discrimination in its non-written membership regulations and in their publication against ethnic minorities.

The Taliban directly and physically harm the members of minor ethnic or religious groups in Afghanistan while RAWA group makes media propaganda against the minor ethnics and their political leaders to harm them in the media.

The Taliban benefits anarchism to rule on people with the power of gun and the money of opium.

RAWA group benefits anarchism to create imaginary women champions and heroine figures to get financial funds from the western societies.

Using religion the Taliban constantly emphasize on the expulsion of the foreign troops and foreign helpers from Afghanistan while they themselves do not have any alternative proposition for the reconstruction of Afghanistan if the ground is given to them.

RAWA group using words such as democracy, women’s rights and social justice issue constantly emphasizes the immediate expulsion of the foreign troops and the foreign helpers of Afghanistan from this country while they themselves do not have any alternative plans for the country.

The Taliban commit suicide bombings and encourage their followers to do the same in order to reach their political goals while RAWA group encourages the women to self-burnings and committing suicides to get their rights. In many cases of women’s self- burnings in provinces of Afghanistan, the self-burners were mostly provoked to self-burning by RAWA group promoters.

In other cases the RAWA group has provoked women in throwing acid on men’s faces in case if their rights were violated.

The Taliban follow the orders of Pakistani Intelligence Services while RAWA group does the same.

The Taliban impose Islamic Hijabs on women while the RAWA group promotes the veils when they go among the women and talk to them.

Considering all these facts, if we want to compare the RAWA group in the regional level, they have some common similarities to some extend to The Women of Hezbollah or Hammas but they are not as organized as them; they are extremist, crusty, intolerable and constant on what they do.

The harshest part of the facts about RAWA group is the financial corruption and RAWA’s partnership with an international MAFIA of fund-raising using the name of Afghan Women who do not benefit even a cent of it.

The RAWA group leaders constantly travel to Europe, Australia, and to the Americas, to give speech about Afghan women and collect money for them, but no body knows what happen to those collected funds.

Lately the Afghan government has repeatedly complained about the way the foreign funds are being stolen in Afghanistan which could refer to RAWA group as well as one of such associations.

RAWA group activities are not known to people, because they do not have a vast root among the people.

If RAWA group is really an association for women’s rights, now that the political ground is open for women in Afghanistan, why it doesn’t sincerely work for women in positive and constructive activities?! May be that way they would not exist anymore. 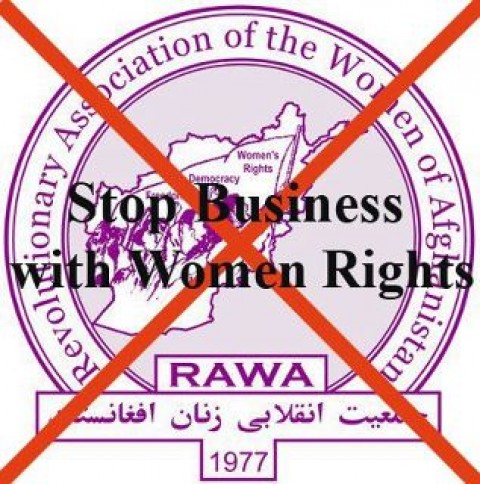