Two radical Muslim clerics have been identified as influential online cheerleaders for fighters seeking to topple the Syrian president, Bashar al-Assad, in a pioneering academic study published on Wednesday.

Researchers based at Kings College London reveal how social media is being harnessed by a network of radical preachers to inspire and guide British and other western Muslims waging jihad in Syria.

By examining tweets and Facebook postings used by certain rebels, people who follow the conflict from abroad and the two clerics, the academics say they have been able to provide a unique and unfiltered window into the minds of western and European foreign fighters in Syria.

The information allowed the analysts to identify a set of new spiritual authorities who have the largest followings. The report says they are the American-based cleric Ahmad Musa Jibril and the Australian preacher Musa Cerantonio. Both speak English and are based in the west.

Although there is no evidence to suggest these individuals are physically involved in facilitating the flow of foreign fighters to Syria, or that they are co-ordinating their activity with jihadist organisations, they are playing the role of cheerleaders. It is clear that they are important figures whose political, moral and spiritual messages are considered attractive to a number of foreign fighters, the researchers conclude.

Syria may be the first conflict in which a large number of western fighters have been documenting their involvement in conflict in real-time, and where – in turn – social media represents an essential source of information and inspiration to them, the report, a product of a year-long study, concludes.

The Kings College team were able to assemble a database which now includes the online profiles of 190 western and European fighters, most of whom are affiliated to the two most prominent groups fighting the Assad regime – Jabhat al-Nusrah or the Islamic State of Iraq and Sham (Isis).

Overall, the researchers estimate, there are about 11,000 foreign fighters in Syria, and about 2,800 are European or western. Anti-terrorist investigators in the UK believe about 400 Britons have gone to Syria to wage jihad, and have raised concerns about what might happen if and when they return.

A total of 12,000 people have liked and receive updates from Cerantonio on Facebook and he is more explicit in his endorsement of violent jihad than Jibril, according to the researchers at the International Centre for the Study of Radicalisation (ICSR) at Kings College. 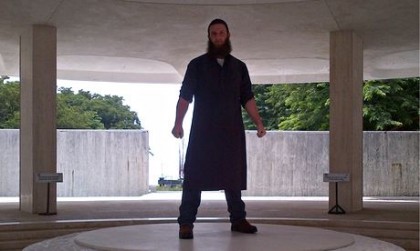 A picture posted on the Facebook site of Musa Cerantonio. Photograph: Guardian

In one post from last December seen by the Guardian Cerantonio called for assassinations and war against the US. If we see that Muslims are being killed by the tyrant leaders of the USA then we must first stop them with our hands (ie by force). This means that we should stop them by fighting them, by assassinating their oppressive leaders, by weakening their offensive capabilities etc … This is not something that is beyond us at all, he wrote.

Referencing the work of terrorist cells, he said: A small group of believers was able to bomb their warship (the USS Cole), destroy their embassies, attack their military and financial headquarters, they were able to fight their soldiers and to significantly weaken them and bring them closer to defeat … What then if the entire Ummah [Muslim community] stood up to do so?!

Though sporadically critical of them, Cerantonio describes the Isis group, which is closely affiliated to al-Qaida, as the best forces on the ground in Syria.

Australian Federal Police ​(AFP) said they were aware of Cerantonios Facebook page but would not confirm whether they were investigating him or not.

Speaking about Cerantonio, the AFP added that they continue to assess material placed on social media that may be in breach of Commonwealth laws.

An AFP spokeswoman said: The AFP would like to remind the community that it is an offence to travel to a foreign state with the intent of engaging in hostile activity, or to provide financial support to individuals or groups involved in either side of a foreign conflict.

Michigan-born Jibril, 42, is a convicted fraudster who spent eight years in a high security US prison and has previous associations with radical preaching. When he was sentenced in 2005, the FBI said in court documents that he was running a radical Salafi website, which carried a library of fanatically anti-American sermons by militant Islamic clerics.

Though he does not openly incite his followers to violence, Jibril, the Kings College report says, started tweeting support for the Syrian rebels 13 days after he was released from prison.

In one Youtube sermon he says: When your brothers in Syria speak, everyone today needs to shut their mouth and listen, because theyre proving themselves to be real men.

He is popular on Facebook, where his personal page boasts more than 145,000 subscribers to his posts.

The study says Jibril is now the most liked personality on Facebook among the foreign fighters they tracked and is followed by 60% of foreign jihadists in Syria on Twitter.

Within hours of the death in Syria last December of Ifthekar Jaman, from Portsmouth, Jibril sent a message of condolence via a series of direct messages on Twitter to a member of his family.

Uploaded to the family members public timeline, the messages read: I didnt know him [Ifthekar] but when I read of him today it made me weep, may Allah be with you and may Allah grant him ferdous [the highest level of paradise]!

Give my salam, love and respect to all the family. If I was there it would be a great honor to visit you all. The message was retweeted 97 times and favourited 141 times.

Jibril described the 20-year-old Manchester man, Anil Khalil Raoudi, as a great brother and also wished him entry into paradise. According to the academics report, the two clerics complement rather than compete with each other. When asked by the Guardian if he incited others to violence and possible acts of terrorism Cerantonio replied: I do not doubt that I have called upon all believers, whether young or old, to respond to the commands of God.

In answers to questions from other media outlets Cerantonio said: Our aim must be to unite the ranks of all Muslims … as one nation under the leadership of a Khalifah [spiritual and political head] who rules by Allahs Law.

Jibril did not respond to questions put by the Guardian or requests for an interview.

Shiraz Maher, of the ICSR, said the report represented the first empirical analysis of whats important for foreign fighters in the Syrian context. Cerantonio and Jibril represented a new breed of virtual preachers, he said. We never intended to write the report in the way it was written, we just crunched the numbers and these two came out top and the evidence suggests that these two people are very important to people in their 20s who are invested and interested in the Syrian conflict.

Neither of them has a mosque or a traditional constituency in the way that a radical preacher like Abu Hamza used to have who still had a base to operate from.

These guys have become totally borderless, virtual clerics who operate solely more or less through the internet and on popular media, Youtube, and in the case of Cerantonio, through international TV stations as well.

Protest against the Hazara Killings in London