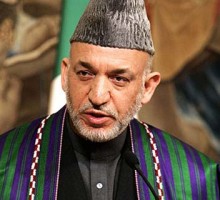 KABUL – President Hamid Karzai has finalized a list of new Cabinet picks for a vote of confidence from the lower house of parliament, a senior official said on Wednesday.
Some acting ministers and new faces would be referred to the Wolesi Jirga after the house administrative board’s elections, the deputy parliamentary minister, Karim Baz, told Pajhwok Afghan News.
Ministries of water and power, public health, urban development, communications, Transport and information technology and higher education are currently being headed by acting ministers.

Under a law passed by the Wolesi Jirga in December 2009, the tenure of an acting minister should not exceed one month. Similarly, a Cabinet member sacked by Parliament cannot serve as an acting minister.
Despite repeated promises, the Karzai administration has failed to replace acting ministers over the past few years.

“According to my information, a meeting at the Presidency is underway to discuss the list of nominees for a vote of confidence,” said the house first deputy speaker, Khalid Pashtun.

The Wolesi Jirga would return to work from its winter recess on February 21, with a debate on next year’s budget, election law and the administrative board’s polls high on the agenda, Pashtun concluded.