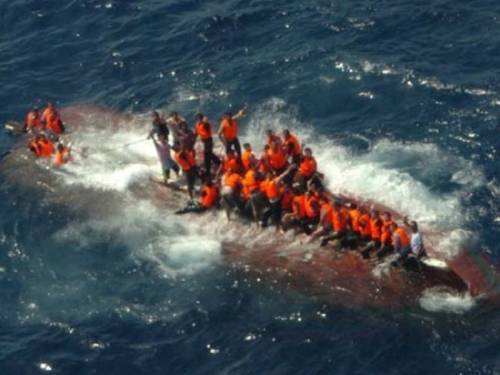 Asylum policy is in focus in the wake of recent boat tragedies. Here’s a look back at the major documented incidents of asylum seeker deaths at sea and related boat incidents since 2001.

The following is a list recording incidents resulting in asylum seeker deaths, and presumed deaths at sea since 2001.

The number of people seeking asylum on Australian shores has risen dramatically in the last three years, as has the number of incidents resulting in deaths at sea.

July 16, 2013: The latest asylum seeker boat tragedy sees the death of four asylum seekers, and the rescue of 144 survivors by the navy near Christmas Island.

July 7, 2013: A baby boy was killed, and eight people were feared missing and drowned after a boat sank off Christmas Island. Eighty-eight people were rescued, but Customs and Border Protection services were criticised for their delayed response and the tragedy, which has raised calls for an investigation into the service’s search and rescue capacity.

May 17, 2013: Two asylum seekers died off the coast of Indonesia, 48 survivors were found. Fairfax reports they were taken back to Indonesia by a cargo ship.

April 12, 2013: Up to 85 asylum seekers believed to be dead after their boat sank off the Indonesian coast within the countrys search and rescue zone, Fairfax reports.

March 26, 2013: Two asylum seekers died when their boat sank during a rescue attempt by Australian border protection, which ocurred within 15 nautical miles of Christmas Island.

January 29, 2013: Three deaths and 20 survivors, including a four-year-old boy and a 10-year-old girl, from a boat capsize off the coast of Central Java.

October 27, 2012: Thirty-three asylum seekers drowned on the way to Christmas Island. Only one survivor was found.

August 30, 2012: Up to 100 ethnic Hazara asylum seekers fleeing the Taliban in Afghanistan died after their boat broke down eight nautical miles off the coast of Java. Some 55 people were rescued by Indonesian search and rescue teams.

July 2012: In two incidents over the space of a week, a known 94 asylum seekers drowned en route to Australia.

April 10, 2012: In an incident echoing the 2009 Oceanic Viking standoff, a group of 120 asylum seekers in Indonesia refused to leave the ship which rescued them as their boat sank on the way to Australia.

February 2, 2012: Some 54 Burmese asylum seekers were rescued by fishermen in the open sea off the north-east coast of Indonesia after their boat broke dow, Fairfax reported.

December 18, 2011: Over 160 people feared dead after their boat sank off the coast of Java. Reports differed as to how many survivors there were. Indonesian authorities confirmed 34 survivors, while Home Affairs Minister Jason Clare said 87 people were rescued by fishermen. The boat carried between 215-250 asylum seekers and included 40 children.

January 11, 2011: 17 asylum seekers drowned after their wooden vessel sank off the coast of Java. The bodies of women and children were found in the water. There were 45 survivors.

Boat (called Suspected Illegal Entry Vessel-221, or SIEV-221) carrying some 90 asylum seekers, mostly from Iraq and Iran, sinks off the coast of Christmas Island, killing 48 people aboard; 42 survivors were rescued.

October 10, 2009: A boat carrying more than 250 Sri Lankan Tamils bound for Australia is intercepted by Indonesian authorities on request from Canberra, prompting a six-month standoff at the port of Merak where they refused to disembark.

April 16, 2009: Five Afghan refugees die when their boat explodes off Ashmore Reef, near Christmas Island, following an act of sabotage which also injured dozens of the 49 on board.

October 19, 2001: An Indonesian fishing boat known as the SIEV-X sinks en route to Australia, carrying 421 passengers, mostly Iraqis and Afghans. Of those, 353 died, 146 of them children, in the most deadly incident involving refugees in Australias history.

October 6, 2001: A wooden boat known as the SIEV-4, carrying 223 passengers and crew, sinks after being stopped by Australian officials attempting to turn it back to Indonesia.

The incident came to be known as the Children Overboard affair after the government falsely claimed that the refugees were throwing infants into the water to try and force officials to bring them to Australia.

August 2001: Australia denies permission for the Norwegian vessel the MV Tampa to enter its waters after rescuing 438 mainly Afghan refugees from a stranded boat off Christmas Island, sparking international condemnation.

(Note: It is impossible to verifiy the exact number of people missing from many incidents)