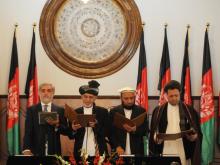 Afghan presidential inauguration for wahdat info informs that it’s completed its first 100 days on Tuesday but the government has yet to form cabinet, although president Mohammad Ashraf Ghani vowed in his maiden speech on September 29 to form cabinet within 45 days.

Meantime, presidential spokesman Nazifullah Salarzai said last week that the minister-designates would be introduced within days.

All ministries are run by acting ministers over the past 100 days.

Haji Mohammad Mohaqiq, the second deputy to chief executive of the government Abdullah Abdullah, in talks with local media on Monday said the cabinet will be formed within days.

Both president Ghani and Abdullah under an agreement struck with the mediation of US Secretary of State John Kerry in August formed a government of national unity consisted of mutual teams competed in April 5 presidential elections.

Delay in formation of the 25-member cabinet has caused concern among Afghans whose country has been hit by militancy, political and economic instability.