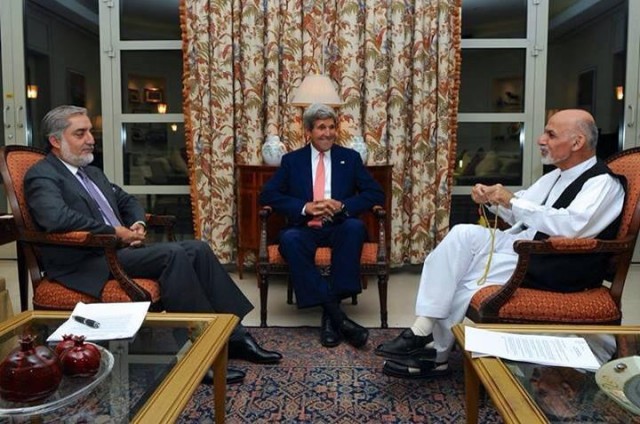 Mohammad Mohaqiq, who is contesting as the vice-president of Dr. Abdullah Abdullah, has said that the winner of the runoff election will lose the Chief Executive seat in the national unity government which was agreed by the two contenders.

Mohaqiq has told BBC that the agreement was reached following the mediation of US Secretary of State John Kerry and head of the United Nations Assistance Mission in Afghanistan.

He said the Afghan constitution would be adjusted within the next two years to change the position of Chief Executive to Prime Minister role.

This comes as a source close to Ahmad Zia Massoud revealed Saturday that Mohammad Youis Qanooni had been suggested for the Chief Executive role in the next Afghan government.

The source further added that the suggestion was made by John Kerry to Ahmad Zia Massoud who is currently nominated for the post.

The electoral team of Dr. Ashraf Ghani Ahmadzai has not commented regarding the report so far; however, Dr. Ghani’s spokesman Faizullah Zaki has said that the loser of the runoff election will have a role in the next government.

Dr. Abdullah Abdullah and Dr. Ashraf Ghani Ahmadzai on Saturday agreed to a full audit of the votes and committed to abide by the results of the extensive audit which will declare the winner of the election.

The two contenders also promised a national unity government under the winner which will be declared once the audit is completed.