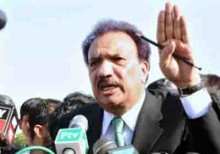 Interior Minister Rehman Malik Sunday claimed that the Tehrik-e-Taliban Pakistan and Lashkar-e-Jhangvi have links with each other.

Talking to media in Jehanian near Khanewal, Rehman Malik said that Malik Ishaq and Allama Ludhyanvi are leading two groups of Lashkar-e-Jhangvi with the new name ‘Ahli-Sunnah wal-Jamaat’.

The Interior Minister said due to the action taken by the government public banned outfits have broken and now they are on the run.

Rehman Malik lamented that on the information provided by the Federal government and its pressure the Punjab government took action against this banned party half heartedly.

Rehman Malik said whenever Taliban become weak they talk about dialogue however; the government will form a strong team to initiate dialogue for peace.

He also asked the Taliban to nominate serious people for talks with the government.

Inaugurating Passport Office in Vehari‚ the Interior Minister said conditions in Karachi and Quetta are being worsened to delay general elections but reiterated that these will be held in time.

He said that action against terrorists without any discrimination will continue till they are eliminated. He added the enemies are working to destabilize the country but we will foil their nefarious designs by forging unity.