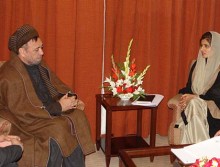 Haji Muhammad Mohaqiq, Member Parliament and Head of Hizb-e-Wahdat Mardam-e-Afghan Party of Afghanistan along with his delegation called on Foreign Minister Khar today.

Welcoming Haji Mohaqiq and his delegation, the Foreign Minister said that the stability and peace in Afghanistan was essential for stability and peace in Pakistan. She said that terrorism was a common threat faced by the two countries and that Pakistan remained committed to extend full support to the peace and reconciliation process in Afghanistan.

She strongly condemned the recent killing of Hazara community in Quetta and informed Haji Mohaqiq that, as directed by the Prime Minister, the provincial authorities were providing all necessary assistance to the families of the victims. The government had also announced Rs.1 million each for those who lost their lives in the terrorist attack.

She also informed that Pakistan wanted to have close relations with all ethnic and political groups of Afghanistan including Hizb-e-Wahdat Mardam-e-Afghan Party, adding that non-interference in Afghanistan’s internal affairs was fundamental to Pakistan’s policy.

Haji Mohammad Mohaqiq thanked the Foreign Minister for inviting him and his delegation to Pakistan and said that Afghanistan and Pakistan were two brotherly countries who had long historical relations. Both countries were important for each other, and peace in Afghanistan was vital for peace and stability of the entire region.

Haji Mohaqiq strongly condemned the killing of innocent members of Hazara community in Quetta recently and emphasized the need to work together for the elimination of terrorism. He also offered deep condolences over this tragic incident.